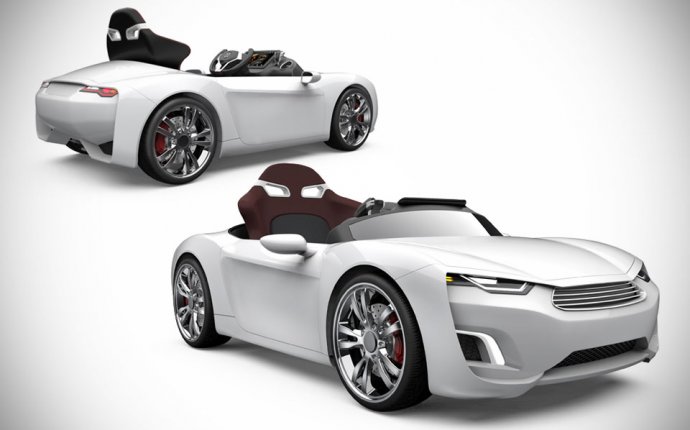 Leading electric car makers must come clean to their consumers about the steps they are taking to keep child labour out of their supply chains, and be open about any abuses that they do find, Amnesty International said today, ahead of the Paris Motor Show where new models of electric cars will be displayed.

Leading electric car makers General Motors (GM), Renault-Nissan and Tesla have failed to disclose the steps they are taking to ensure that cobalt mined by child labourers as young as seven in the Democratic Republic of the Congo (DRC) is not used in their batteries.

Electric cars may not be as ‘clean’ as you would think. Customers need to be aware that their green cars could be linked to the misery of child labourers in the Democratic Republic of Congo.

“Electric cars may not be as ‘clean’ as you would think. Customers need to be aware that their green cars could be linked to the misery of child labourers in the Democratic Republic of Congo. Would customers at the Paris Motor Show buy a car if they thought it had cost someone their childhood?” said Mark Dummett, Business and Human Rights Researcher at Amnesty International.

“Amnesty International’s research shows that there is a significant risk of cobalt mined by children ending up in the batteries of electric cars. These vehicles are presented as the ethical choice for environmentally and socially conscious drivers, so the companies that manufacture them must come clean and prove they have acted diligently in getting their supplies.”

More than half of the world’s cobalt, which is a key component in the lithium-ion batteries which power electric vehicles, comes from the DRC, 20% of which is mined by hand. Research by Amnesty International for its report, This Is What We Die For, released in January 2016, found that adults and children as young as seven work in appalling conditions in artisanal mining areas. Researchers found these miners are at risk of fatal accidents and serious lung disease and earn as little as one dollar a day. 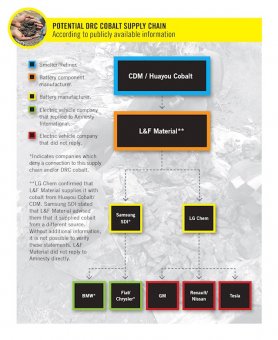 Samsung SDI, also from South Korea, supplies BMW (i3 EV and i8 PHEV) and Fiat-Chrysler (500E EV), the two car manufacturers acknowledged in letters to Amnesty.

In its January 2016 report, Amnesty International revealed that there was a risk that other auto companies, including Daimler, VW and the Chinese electric vehicle giant BYD, were using cobalt that had come from mines in the DRC where children and adults work in unsafe conditions.

Amnesty International used investor documents to show how cobalt mined in the DRC is bought by a Chinese company, Zhejiang Huayou Cobalt (Huayou Cobalt), which supplies battery component manufacturers in China and South Korea. In turn, these component manufacturers sell to battery makers including LG Chem and Samsung SDI, that supply many of the world’s largest car companies.

Daimler has stated that it does not source directly from the DRC nor from suppliers in the DRC. Similarly, VW has denied links to Huayou Cobalt. Both advise that they are doing more to detect human rights risks in their cobalt supply chains, but without providing evidence. For example neither explain how they verify information provided to them by their suppliers. Critically neither disclosed the identity of smelters nor any assessment of the adequacy of their practices. BYD did not reply to Amnesty International’s request for information.

General Motors (GM) and Tesla did not reply to a request from Amnesty International to provide evidence of how they identify and address human rights abuses in their cobalt supply chains, particularly in relation to child labour. Renault said it would respond to Amnesty “at the earliest possible time, ” but provided no other information.

RT @TimmonsRoberts: Time to switch to electric vehicles and renewables on the grid--huge health benefits--$billions in Mass. study. Hot day…